On a beautiful Saturday afternoon 20 alumni gathered at Zürich Airport to enjoy a tour behind the scenes and some quality time together. After learning about some general facts and figures about the airport, we passed security control and went onto the tarmac where our guide, who was working for 30 years for Swissair and then Swissport in Zürich and New York, told us a bit more about the outline of the airport and how it has grown from a small airport, where passengers used to walk from the gate to the aircraft on foot to today’s international airport that handles 250’000 flights per year and through which 25 million passengers travel each year.
After that, we went to the baggage scanning department, where we saw all four steps of baggage scanning and the impressive baggage transfer system. Our guide told us that once security agents suspected a fragmentation bomb in a bag and when they brought it to the passenger to open it, the item in question was a neatly folded sequin dress. After looking at the collection of prohibited items they found in checked in bags, we realized that there is nothing that passengers don’t try to transport!
Next, we walked the 1,5 km through the baggage sorting system and the baggage tunnel to Terminal E. Each piece of luggage is transferred from the scanning system onto the transport system, gets its own little cart in which it gets transported at 35 km/h to Terminal E, where each piece is placed in the aircraft containers by hand. The people doing this job lift around 12 tons per day. We will all pack a little less next time we fly!
After walking along Terminal E on the airfield and admiring the Dreamliner from Quatar Airlines, we saw the Airbus A380 from Emirates proceeding to the runway to take off and many Airbus A340 aircrafts from Swiss International Airlines landing and rolling to their parking positions. 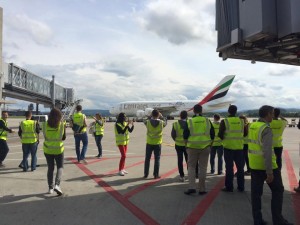 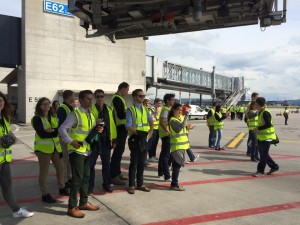 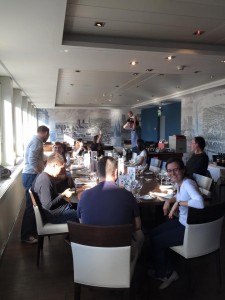